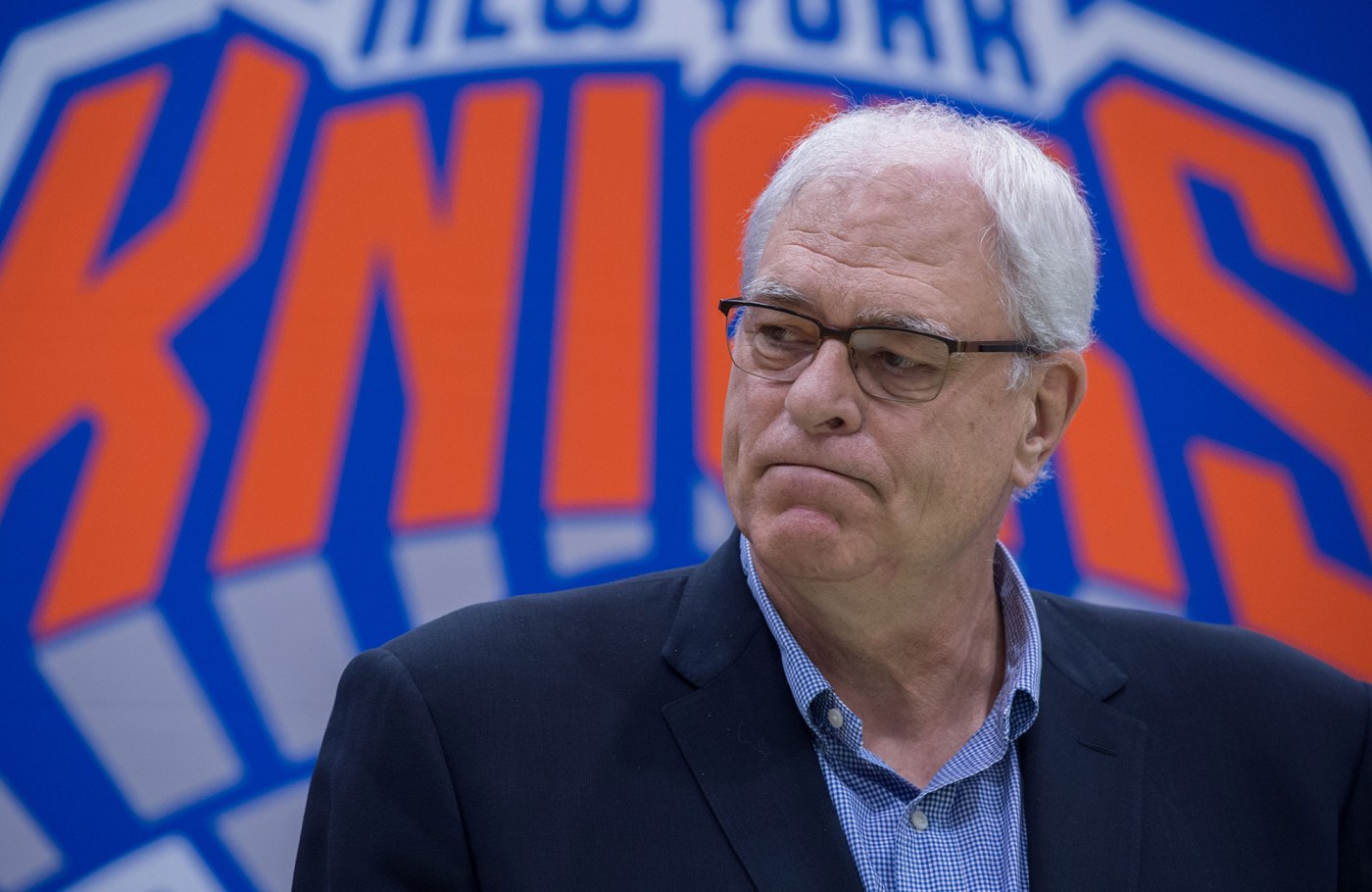 The nightmare is over.

The Vertical’s Adrian Wojnarowski announced on Tuesday night that Knicks owner James Dolan was weighing the future of Phil Jackson in New York.

That ultimately led to the Knicks parting ways with the 13-time champion on Wednesday, and it’s the best thing that’s happened to their tortured organization in years.

Dolan pulled off what looked to be a miracle on March 18, 2014, hiring Jackson as president of operations and bringing a newfound sense of hope to Knicks fans who had just missed the playoffs with a 37-45 record the year before.

Jackson got paid in the grandest of fashion, inking a five-year, $60-million contract. The people of New York didn’t bat an eye at the massive amount of money. It was worth it to have one of the greatest basketball minds of all time in their corner.

“There is only one Phil Jackson, and he’s synonymous with winning basketball teams,” Dolan told the media at Jackson’s introductory press conference on March 18. “His history of success in the NBA is unrivaled, and he is the ideal executive to lead our team and develop short and long term plans that build a successful franchise and result in an NBA championship. That is our only goal, and what our loyal fans deserve.”

The questions began to circulate: How quickly can Jackson make the Knicks a championship team? How many rings will they win under the great Phil Jackson’s leadership?

Excitement was at an all-time high for an organization that hadn’t won a title since 1973.

Jackson made his first big move on April 21, firing head coach Mike Woodson and ultimately replacing him with recently-retired Derek Fisher on June 10. The news of Woodson’s firing was met with criticism. He had led the Knicks to a 54-win season and a trip to the playoffs just two years prior, and now he was out of a job.

Sure, Fisher and Jackson had history in Los Angeles. The two won five titles together on the Lakers. Fisher also knew Jackson’s triangle offense to a tee, but giving the head coaching job in New York to someone with zero coaching experience seemed to be a reach.

After getting his guy in Fisher, Jackson turned his attention to the roster. Jackson made his first trade as the Knicks president on June 25, shipping off Tyson Chandler and Raymond Felton to Dallas for Jose Calderon, Samuel Dalembert, Wayne Ellington, Shane Larkin and two second-round picks.

Once again, the decision was met with criticism. Chandler had his injuries, but he still averaged a solid 8.7 points and 9.6 rebounds in the 2013-2014 season. Although Felton was coming off a down year, the 29-year old still produced 9.7 points and 5.6 assists. Trading away two players that each averaged over 30 minutes per game for what seemed to be scraps just didn’t add up.

Jackson made a three-team trade on January 5, 2015, with Cleveland and Oklahoma City — a deal even more absurd than the last. The Knicks sent J.R. Smith and Iman Shumpert to the Cavaliers for Lou Amundson, Alex Kirk and a 2019 second-round pick. They also received the Thunder’s Lance Thomas.

Jackson seemed to be having a garage sale with his assets in New York. Smith averaged 14.5 points with the Knicks, and shipping him and Shumpert off to the Cavaliers for a couple of players who’d struggle to even make a spot on their rotation left the people of New York feeling uneasy.

The 2014-2015 season ended miserably. New York finished with a record of 17-65, marking its worst winning percentage in the 69-year history of the organization.

There seemed to be an underlying method to the madness. The two lopsided deals did clear up cap space for New York. Now all they had to do was get a good, young player in the draft and then sign a star in the offseason to play alongside Carmelo Anthony.

The Knicks actually did well in the 2015 NBA Draft, selecting Kristaps Porzingis with the fourth overall pick. The 7-foot-3 power forward out of Latvia was met with boos on draft night due to his lack of notoriety at the time, but picking Porzingis turned out to be Jackson’s only real contribution to New York in his three-year tenure.

Now it was time to bring in those big-name free agents in the offseason that Jackson promised. The team had its eyes on game changers like LaMarcus Aldridge and Dwight Howard — players who could dominate the paint.

The top free agents wanted nothing to do with an organization in turmoil like New York. What was once a premier destination for players was now plagued with a stigma of lost identity and mediocrity. The Knicks ended up settling for the likes of Arron Afflalo, Robin Lopez, Derrick Williams and Kyle O’Quinn.

The acquisitions didn’t exactly change the culture as the Knicks got off to a sluggish 23-31 start in the 2015-2016 season. That marked the end of Fisher’s stint in New York as the team fired him on February 8, 2016.

Interim Head Coach Kurt Rambis held the team down for the remainder of the season, finishing with a record of 32-50. Once again, the offseason brought some hope as rumors of recently-fired Tom Thibodeau becoming the new head coach began to circulate.

But Jackson still believed in his triangle offense that helped lead him to 11 titles as a head coach, and he quickly dismissed the idea of bringing in a coach such as Thibodeau that would surely resist running his system.

“Someone has to match the style about the way we do things,” Jackson told the media on February 9. “And there’s a certain style that I have that I think works and have found to work before.”

Jackson found his new head coach on June 2, hiring former Jazz and Suns guard Jeff Hornacek. The decision certainly wasn’t met with applause in New York as fans had to watch Thibodeau join the Timberwolves instead of their beloved Knicks.

Jackson finally got a star to go alongside Anthony on June 22, but with a catch. The Knicks traded Calderon, Jerian Grant and Lopez to Chicago for Derrick Rose, Justin Holiday and a 2017 second-round pick.

The acquisition of a Rose, a former MVP, looked good at first. Rose wasn’t the same after all the injuries that plagued him in Chicago, though. Nevertheless, a foundation was finally in place. Jackson followed up the deal by signing Joakim Noah, Courtney Lee and Brandon Jennings.

Things were looking up for the Knicks. Noah was clearly overpaid (4-year, $72-million deal) and Jennings was only signed to a one-year deal, but talks of getting back to the playoffs began to spread through the streets of New York.

The 2016-2017 season didn’t live up to expectations, though, as Jackson found himself in the news for all the wrong reasons. The controversy started on November 14 when Jackson referred to LeBron James’ group of friends and business partners as a “posse.” It continued when he turned his criticism towards his own star player, Anthony, calling him out for holding the ball too long.

Things weren’t going so well on the court either. Noah only played 46 games after undergoing a season-ending arthroscopic knee surgery. Rose managed to play 64 games, but he faced some heat for missing a game against Washington without giving notice on January 9, 2017. Jackson remained silent on the matter, and the Knicks ultimately finished the season with a record of 31-51.

Dolan seemed to be nonchalant about it all, watching as his ship sank while simultaneously bursting into flames. He even picked up the final two years on Jackson’s contract on April 13.

“Phil has two more years after this to work and develop, and I’m going to honor my deal with him,” Dolan told the New York Post’s Mike Vaccaro on April 13. “And that includes keeping my hands off.”

Knicks fans thought they had just hit rock bottom, but they were sorely mistaken. Jackson continued his feud with Anthony, claiming he would be “better off somewhere else.” Reports even claimed that Jackson was considering buying out Anthony if he refused to waive his no-trade clause.

Jackson then attacked the very player he defended so vehemently in the 2015 NBA Draft, claiming Porzingis wasn’t ready to be a leader in New York. Porzingis then blew off his exit meeting on April 18, leading Jackson to threaten to trade him in a desperate attempt to regain some respect that had dissolved years ago.

Dolan finally put an end to the madness on Wednesday, freeing his team from the terror that was Jackson.

When we look back on Jackson’s time in the NBA, we’ll look at his stint with the Knicks as a failed victory lap. Jackson entered New York as a savior in the eyes of Knicks fans, but he was a false prophet.

He’ll walk out of the Knicks front office with $60 million when it’s all said and done, and that might be all he wanted this whole time, but he’ll also walk out with a stain on his reputation – one that will never come off.