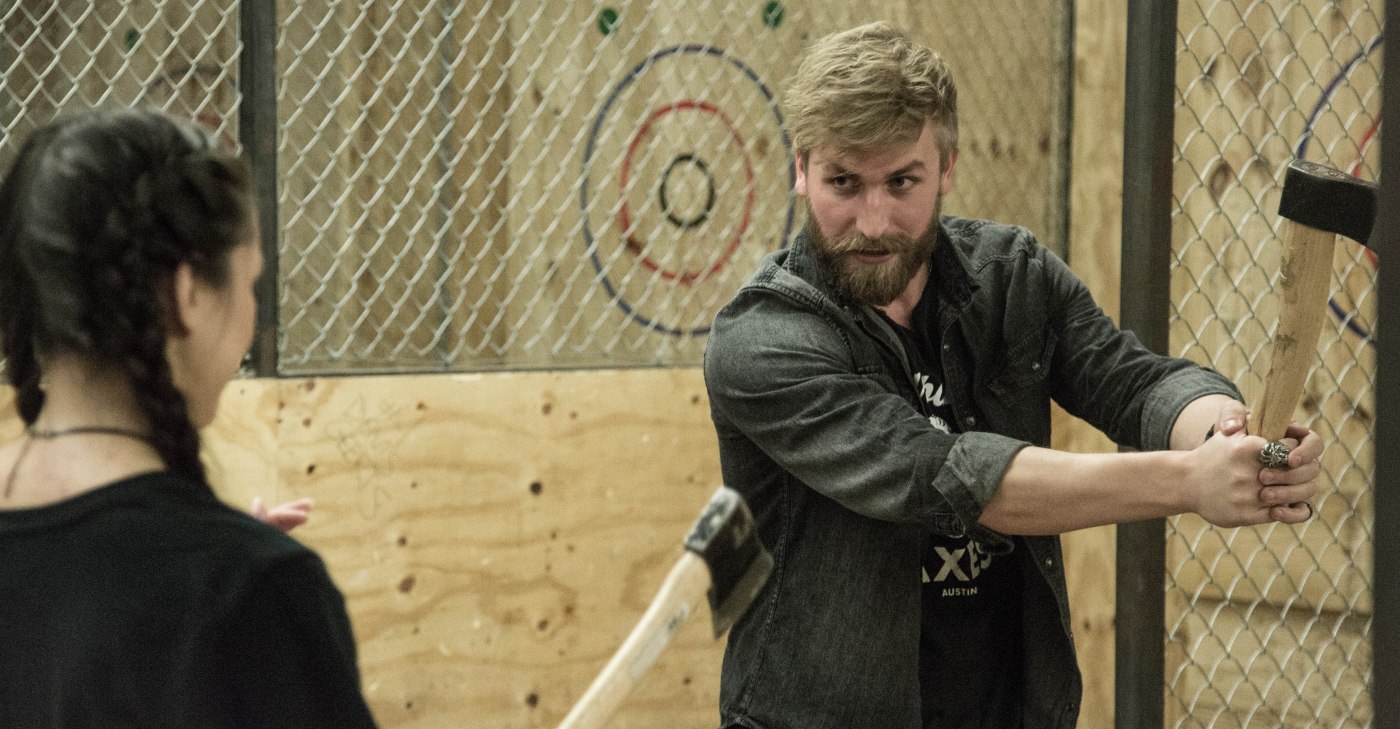 The noise is distinct – even from outside.

The dull thud of axes splintering wood echoes off the walls of Austin’s Urban Axes, filling the parking lot and the ears of mystified guests long before they open the black warehouse door.

The venue has carved out a vibrant community of blade-wielding enthusiasts. In seven short months the small shop in East Austin has been embraced by the young and hip — quickly becoming a fixture in the weirdest city in the South. With locations in Philadelphia, Baltimore, and now Austin, this modern sport offers something for everyone.

Patrons, lined up side by side, walk up to the black tape on the ground, axe in hand, and take aim at the 10-foot-wide target just over 14 feet away. The objective is simple.

Although the 21-and-up venue mostly draws in young adults, it’s not unusual to see the occasional 80-year-old pick up an axe. Groups are able to rent out a two-and-a-half-hour time slot consisting of a 30-minute tutorial, an hour and a half of round robin competition and a final 30-minute tournament to declare a group champion.

For some, Urban Axes offers an alternative to more traditional end-of-work extra-curriculars. The venue encourages its patrons to bring their own alcohol, and the large refrigerators alongside each station sit brimming with wine and craft beers during operating hours.

Kimberly Hertzak, a now-regular, found herself throwing axes for the first time when her company booked a workplace happy hour in late February. It was between Urban Axes and starting a book club, she said with a laugh.

“We were thinking of something out of the box to do to bring everybody at work together, so that’s what we’re here for,” Hertzak said. “It’s totally normal to have that healthy fear your first time, but if you’re wearing closed-toes shoes you’re fine.”

Urban Axes does feature a more serious scene, though. As a member of the National Axe Throwing Federation, the venue holds an eight-week league for 180 players. Competitions consist of a three-round series with five throws per round.

Among those competitors is Matt Maa. The 27-year-old first picked up an axe in November, 2017, when his girlfriend threw him a birthday party at Urban Axes. Since then, Maa shows up twice a week; once for the league he’s in and once to hone his skills.

Maa struggled in league play at first, but through constant practice, he’s quickly become one of the better members.

“It was definitely intimidating because apparently our league is stacked,” Maa said. “There definitely was a large skill gap because some people played regularly and others were brand new, but it helped to get some coaching. Everyone is also super nice about giving pointers, too.”

Regardless of skill level, safety remains a top priority. Urban Axes employs a creative solution to the inherent dangers of drinking and axe flinging, providing each group with a safety coach. These “axeperts” as they call themselves — half entertainers, half teachers —structure each session and ensure every visitor is throwing safely and correctly.

“We make sure that everyone has fun and stays safe,” said Kyle Hough, one of the original axe instructors. “It’s really fun when you get it to stick. It’s a satisfying feeling. We haven’t had anyone who has left having had a bad time.”

Above all else, the appeal of Urban Axes lies in its atmosphere. The open, friendly space caters equally the hardcore fanatic and the casual chucker.

The success of the Austin location has prompted Urban Axes to eye expansion into other areas of Texas as well. The company is seeking a site in Houston, less than a year after doors opened in the state’s capitol.

“The environment is loud, but I think that’s something to expect,” Hertzak said. “Everyone is super friendly, they want you to join the league and you feel like you’re part of the crew. It’s always been a really good time, so they’re very accommodating.”